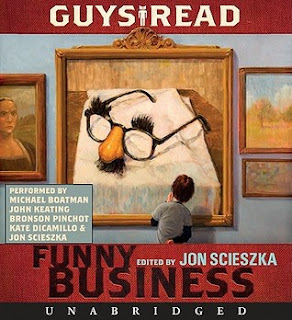 It’s here: Volume One of the official Guys Read Library. Jon Scieszka’s Guys Read initiative was founded on a simple premise: that young guys enjoy reading most when they have reading they can enjoy. And out of this comes a series that aims to give them just that. Ten books, arranged by theme, featuring the best of the best where writing for kids is concerned. Each book is a collection of original short stories, but these aren’t your typical anthologies—each book is edgy, inventive, visual, and one-of-a-kind, featuring a different theme for guys to get excited about.


Funny Business is based around the theme of—what else?—humor, and if you’re familiar with Jon and Guys Read, you already know what you’re in store for: ten hilarious stories from some of the funniest writers around. Before you’re through, you’ll meet a teenage mummy; a kid desperate to take a dip in the world’s largest pool of chocolate milk; a homicidal turkey; parents who hand over their son’s room to a biker; the only kid in his middle school who hasn’t turned into a vampire, wizard, or superhero; and more. And the contributor list includes bestselling authors, award winners, and fresh new talent alike: Mac Barnett, Eoin Colfer, Christopher Paul Curtis, Kate DiCamillo (writing with Jon Scieszka), Paul Feig, Jack Gantos, Jeff Kinney, David Lubar, Adam Rex, and David Yoo.
Guys Read is all about turning young readers into lifelong ones—and with this book, and each subsequent installment in the series, we aim to leave no guy unturned.
Laugh out loud hilarious. I was almost crying at times. There was so many good stories, there were some that were better than others. I think my favourite had  to be the one with the  nipples or possibly the bloody souvenir no maybe the letter to the author.
I downloaded this for free during the SYNC summer reads. There was two new books available for download, this is probably one of my favourites from that list.
The only real thing I can say about this is you need to read it or listen to it. Personally I think the audio version was the way to go. I don't think I would have gotten as much out of it if I had read it.
Posted by Unknown at 5:00 AM