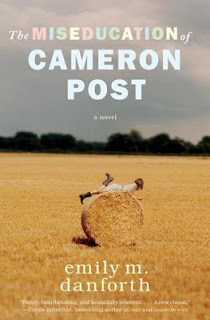 When Cameron Post's parents die suddenly in a car crash, her shocking first thought is relief. Relief they'll never know that, hours earlier, she had been kissing a girl.

The Miseducation of Cameron Post is a stunning and unforgettable literary debut about discovering who you are and finding the courage to live life according to your own rules.

This book left me speechless I have so much love for this book.. Seriously. It brings up so many topics that are controversial and really need to be spoken about more openly. I would recommend this novel for a mature audience, it touches on a lot of hot topic issues.

Cameron's parents die in a car crash and the first feeling she has is relief that they will not find out she was kissing a girl. After the crash, her religious aunt Ruth moves in with Cameron and her grandmother. Cameron keeps her feelings from her family then Coley Taylor comes into her life. Coley is pretty and smart and takes things to the next level with Cameron. When Cameron's aunt Ruth finds out about Cameron she sends her to a religious camp to "fix her".

The characters in this novel were outstanding. I wanted to shake a lot of them, especially Ruth but I understood why the author had those characters there and I appreciated what they brought to the story. This story made me think and feel for Cameron. She is a character I think everyone can relate to. She is a girl struggling to find herself. She is dealing with the loss of her parents, first love and heartbreak. The fact that she is a lesbian in a closed minded religious town makes her story that much more compelling. I felt like every character had a purpose and they each represented someone we know or know of. I was heartbroken for Cameron to not have the support of her family, especially from her aunt Ruth who for being super religious still engages in pre-marital sex.

The layout of the plot was a lot different that I had first anticipated in such a great way. We see Cameron learn about first love and heartbreak. We get to see Cameron grow as a character, watch her fall helplessly for the wrong person then as she picks up the pieces of her broken heart.  This book will not leave you with all your question answered. I felt like the author was sitting and telling her story but she did not give a nice little bow at the end because her story is not complete, there is more to come. I felt satisfied but I still have more questions about what is going to happen next. I was completely in love with this novel and I hope more people read it because it is absolutely breathtaking.
Posted by Unknown at 4:00 AM