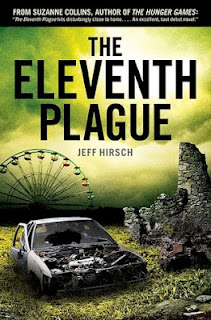 In an America devastated by war and plague, the only way to survive is to keep moving.

In the aftermath of a war, America's landscape has been ravaged and two-thirds of the population left dead from a vicious strain of influenza. Fifteen-year-old Stephen Quinn and his family were among the few that survived and became salvages, roaming the country in search of material to trade for food and other items essential for survival. But when Stephen's grandfather dies and his father falls into a coma after an accident, Stephen finds his way to Settler's Landing, a community that seems too good to be true, where there are real houses, barbecues, a school, and even baseball games. Then Stephen meets strong, defiant, mischievous Jenny, who refuses to accept things as they are.

The US has been destroyed by war and illness. The eleventh plague has killed 2/3 of the population. It was introduced as a counterattack against the US. The epidemic was a vicious strain of the influenza.  The people who are left are not struggling to survive.
The story begins soon after the narrator; Steve Quinn’s grandfather had died. It is not only his father and himself left in the family. They continue to scavenge and struggle to survive. After a tragic accident causes Steve’s father to be put into a coma Steve discovers a place called Settler’s Landing. It is quiet an adjustment for Steve o get used to. Settler’s Landing has managed to retain many luxuries that were thought to be lost forever.
I enjoyed the description of the book. I found it to be very descriptive and found myself completely absorbed into the story. There were a lot of secondary characters but they all had their place in the story.  I found that none of them really stuck with me though, I enjoyed all of them but there were none I really connected with.
This is a unique story, I found this completely original and unique. I like the different worlds that were brought together. The ending to me seemed a little swept up. All of the loose ends were taking care of.  The story was good while I was reading it but it did not leave me wanting more.
I look forward to reading more works. I enjoyed the writing style. I gave it a 4/5.
﻿