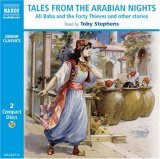 Toby Stephens takes us back to the world of cunning, adventure, mishap and fun. Sheherezade, night after night, weaves her tales and Aladdin and his Magic Lamp, Sinbad the Sailor, Ali Baba and the Forty Thieves and other tales come alive. The unforgettable music of Rimsky Korsakov sets the scene perfectly. A delightful treat for young listeners.


I listened to this as part of the free SYNC free audio books available all summer.
Scheherezade tells the stories of Aladdin, Ali Baba and the forty thieves, Sinbad and in order to entertain the sultan longer so he will not kill her.  She has agreed to marry the sultan even thought she knows the fate that awaits her in the hopes she can change his mind to keep him from killing more women.
She starts with the story of Aladdin.  It is a lot darker than the movie version that I remember. I did not like the book version as much as the movie version. I found the book version portrayed Aladdin to be very selfish. I assume the movie version was changed to be more children friendly but I still prefer it. Aladdin’s love for the princess was enchanting. He starts by seeing her and falling in love with her beauty. I know a little shallow but he does redeem himself. He does everything in his power to marry her and protect her.
The second story was about Ali Baba and the forty thieves. I might be a little harsh here but Ali Baba was not the smartest man. He got tricked often and had to be saved by his servant Morgiana who was able to identify the enemy and protect her master. His son Abba Baba also was not the smartest and also had to rely on Morgiana In the end the servant does get rewarded for her hard work.
The third story told by Scheherezade is about Sinbad the sailor. This was my favourite story, there was a lot of adventure and in the end there was a lesson learned that was clear. Sinbad learned that greed will get you nowhere.
Overall I would give this a 3.5/5. I enjoyed the third story but the first two were not as good as I had expected which was disappointing.
Posted by Unknown at 5:00 AM