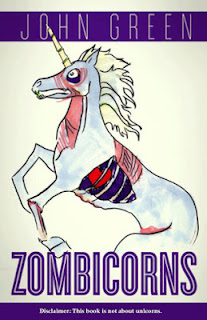 Dearest Reader,
This is a bad zombie apocalypse novella. It was written in a hurry. It is riddled with inconsistencies. And it never quite arrives at whatever point it sought to make. But remember: The $25 you donated to charity in exchange for this steaming mess of prose will help our species shuffle along, and I hope you’ll feel warmed by your good deed as you read. Thank you for decreasing the overall worldwide level of suck, and as they say in my hometown: Don’t forget to be awesome.


This is a short story available for free online. It can be found here
http://effyeahnerdfighters.com/post/2835409604/didnt-get-your-chance-to-get-your-hands-on-john


This book takes place in a zombie infested United States where the zombies are obsessed with corn. There are rumors that Canada and Africa may still be zombie free but nothing has been confirmed. Sixteen year old Mia is left with her adopted dog, Mr. President to scrape by while protecting themselves from the z'ed up. Along the way we learn what happened to Mia’s family.


The plot was a little predictable but I find it is with most zombie movies. You know the majority of the major events that occurred to lead up to and the aftermath of the zombie apocalypse. There were some surprising twists the story I did not expect. Mia turned out to be a pretty dark character and not at all as a pictured her originally. Carolina is a character I find is in a lot of zombie movies; she wants to kill as many Z’ed ups as she can. The difference is we never find out why she is so determined to kill as many as possible.


The description of the scenery was minimal.  I found I could visualize the world Mia was seeing but I found that I had to fill in a lot of the blanks with what I assumed would be around her in z’ed up Chicago. The only downfall I found to this is I have never been to Chicago so I have no idea if I was imagining it correctly.


This story is different from any other John Green book I have read so far.  It was out of the ordinary to see him writing in a different genre.  I am not a huge fan of zombie books normally but I found myself to be quite impressed with this short story.
Posted by Unknown at 6:00 AM