The Season of Passage- Christopher Pike 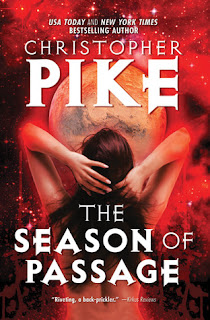 Title: The Season of Passage
Author: Christopher Pike
Source: Borrowed from a friend
Series: No
Rating: 3/5

Dr. Lauren Wagner was a celebrity. She was involved with the most exciting adventure mankind had ever undertaken: a manned expedition to Mars. The whole world admired and respected her.

But Lauren knew fear. Inside—voices entreating her to love them. Outside—the mystery of the missing group that had gone before her. The dead group.

But were they simply dead? Or something else?

A haunting and unforgettable blend of science fiction, fantasy, horror, and suspense from one of America’s bestselling writers. A novel you won’t soon forget.

This is not a book I would have ever picked up on my own. Legit. To start this is my first Christopher Pike book and I am still pretty new to the sci-fi genre. I am a little on the fence on how exactly I feel about it and I am still a little lost if this is YA or adult.

Dr. Lauren Wagner has been given the opportunity to go to Mars. Another crew was sent a few years before but they never returned home. A new crew is being sent to find answers. Lauren's sister Jennifer is not happy about her sister going to space and her fiancée Terry is not pleased she will be gone for two years but this is not an opportunity she wants to turn down even if she does start having weird nightmares.

Jennifer was a little bit of an odd ball. She was hard to get a grasp on, the closer Lauren comes towards leaving the stranger she starts acting. Lauren was a pretty level headed character, her fiancée Terry was a little flakey and them as a couple felt a little odd. I really liked the other crew members, especially Gary. He was funny and got himself into the weirdest situations.

Going to Mars is something we have not yet accomplished so to see this as possible mission was really different. I felt like parts of the story were forced, there was a lot of little parts that I think could have been cut from the story to make it flow better.  I hoped that there would be a better connection between the plot and the characters.

The ending was disappointing. It dragged on and it seemed to head in a new direction before a hasty thrown together feeling ending.
Posted by Unknown at 5:00 AM