The Amulet of Samarkand- Jonathan Stroud 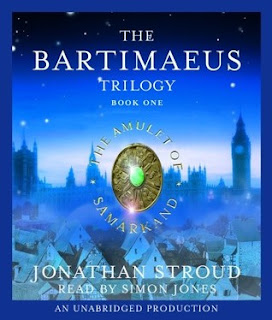 
Nathaniel is eleven years old and a magician’s apprentice, learning the traditional arts of magic. All is well until he has a life-changing encounter with Simon Lovelace, a magician of unrivaled ruthlessness and ambition. When Lovelace brutally humiliates Nathaniel in public, Nathaniel decides to speed up his education, teaching himself spells way beyond his years. With revenge on his mind, he masters one of the toughest spells of all and summons Bartimaeus, a five-thousand-year-old djinni, to assist him. But summoning Bartimaeus and controlling him are two different things entirely, and when Nathaniel sends the djinni out to steal Lovelace’s greatest treasure, the Amulet of Samarkand, he finds himself caught up in a whirlwind of magical espionage, murder, and rebellion.
Set in a modern-day London spiced with magicians and mystery, The Amulet of Samarkand is an extraordinary, edge-of-your-seat thriller with many unexpected twists. Following Bartimaeus and Nathaniel in turn, the story introduces us to two wonderfully memorable characters–destined to go through many adventures together and bound by a spell that is nearly impossible to break.


The narration is split between eleven year old Nathaniel who is a magician and a five thousand year old dijinni named Bartimaeus. Nathaniel summons Bartumaeus with revenge in mind and the results are disastrous. As Nathaniel allows his humiliation caused by Simon Lovelace to blind him he steals the amulet of Samarkand and precedes to get himself into a heap of trouble dragging a very irritated Bartimaeus with him.

The story is all about magic. Migicians and other mythical creatures are rempant. The magicians have learned to tolerate the humans. I loved the world Stroud has created with his explanations and his use of magic. The time period is not specified giving the story a mysterous feel to it.

Bartmaeus narration was insightful and he provides most of the information of the world that sourrounds him and also the history of how magicians came to power. Nathaniel was very childish. He was such a talented magaician but he often threw temper tantrums and allowed himself to get eaily frustrated. He was a frustrating character to get used to at times but I enjoyed the bantering that occured between him and Bartimaeus.

I am courious on where this series is going to go and I hope to contine reading it. This is not a book I would have never discovered and enjoyed if it was not for the SYNC free downloads. I am very grateful that I did discover this book and I hope that others will discover and devour this book like I did.