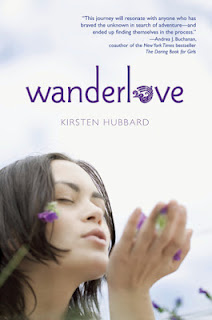 It all begins with a stupid question:

Are you a Global Vagabond?

No, but 18-year-old Bria Sandoval wants to be. In a quest for independence, her neglected art, and no-strings-attached hookups, she signs up for a guided tour of Central America—the wrong one. Middle-aged tourists with fanny packs are hardly the key to self-rediscovery. When Bria meets Rowan, devoted backpacker and dive instructor, and his outspokenly humanitarian sister Starling, she seizes the chance to ditch her group and join them off the beaten path.

Bria's a good girl trying to go bad. Rowan's a bad boy trying to stay good. As they travel across a panorama of Mayan villages, remote Belizean islands, and hostels plagued with jungle beasties, they discover what they've got in common: both seek to leave behind the old versions of themselves. And the secret to escaping the past, Rowan’s found, is to keep moving forward.

But Bria comes to realize she can't run forever, no matter what Rowan says. If she ever wants the courage to fall for someone worthwhile, she has to start looking back.

Kirsten Hubbard lends her artistry to this ultimate backpacker novel, weaving her drawings into the text. Her career as a travel writer and her experiences as a real-life vagabond backpacking Central America are deeply seeded in this inspiring story.

The story beings with a single question, are you a travel vagabond?
If you answer if no but you want to be this book is for you. Eighteen year old Bria has recently broken up with her controlling boyfriend Toby and decides to travel for the summer. After her two friends back out of the trip she decides change her original travel plans and head to Central America. Unfortunately, Bria sign up for the wrong tour and now is stuck in Central America with fanny pack wearing middle aged travelers. Bria thinks her trip is doomed until she meets Rowan and his group who are skilled traveler who likes to take trips off the beaten path. This is where Bria’s adventure beings.
The setting was marvelous in this book, Bria beings her adventure in Guatemala. My sister is from there and it is rare to find any book that mentions it. I loved the description given for every setting she was in. The amount of detail to everything made me envious. The author covered everything from local food to scenery. My favorite part had to be the visual aspect. Bria’s drawings are included throughout the book. It made me feel like I could see into Bria’s brain.
I had a love/hate relationship with the characters. Bria is a character that at times I wanted to shake some sense into. I understand she was trying to get over Toby but it frustrated me that she thought about him so much after he treated her like she meant nothing. Bria and Toby’s relationship was not a healthy one and I am really glad she was not with him in the book but what he did to her and the way she never stood up for herself to him frustrated me. I found she was a complete pushover in general. She allowed everyone to push her around. Rowan is your typical bad boy trying to be good. He has a pretty dark past that he was trying to run from. He did infuriate me at times but overall I liked him. I found all the characters had a lot of growth in the book. Bria finally grew a backbone.
There was no bad part to this book. I loved every minute of reading it. I got frustrated but I never wanted to give up. I rooted for Bria and Rowan. There is some slow burning romance and a few secrets hidden that are waiting to be discovered. Wanderlove is the best travel book I have read this year if not ever.
Posted by Unknown at 6:00 AM