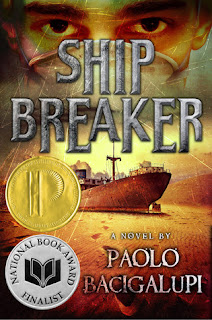 
A gritty, high-stakes adventure set in a futuristic world where oil is scarce, but loyalty is scarcer.In America's Gulf Coast region, grounded oil tankers are being broken down for parts by crews of young people. Nailer, a teenage boy, works the light crew, scavenging for copper wiring just to make quota-and hopefully live to see another day. But when, by luck or by chance, he discovers an exquisite clipper ship beached during a recent hurricane, Nailer faces the most important decision of his life: Strip the ship for all it's worth or rescue its lone survivor, a beautiful and wealthy girl who could lead him to a better life....In this powerful novel, Paolo Bacigalupi delivers a thrilling, fast-paced adventure set in a vivid and raw, uncertain future.

I would totally judge this book by its cover. I just love it so much; it is so dark and twisty. I found it completely matched the premise of the book completely.

Nailer is part of a ship breaker team who takes apart old ships and sells them for scrap. He is part of the light load team and he has to go into the ships and find copper wire.  A storm washes a new ship on the shore that belongs to the swanks, the upper class. On board he discovers a girl has survived and he decides to save her. He has no idea who he just saved.

I really enjoyed the story and I liked the characters but there was just something missing from it that made me not completely fall in love with it.  I found it hard to connect with Nailer who seemed to forgive his father constantly when he should have cut him loose. I thought he was a little soft for the role he was portraying. I loved the secondary characters and I liked how they all came together in the story. My favourite had to be Nita. She was no soft swank she had a lot of hidden potential.

The back story was reasonably well done.  I found the back story to what time period this is to be portraying was a little lack lustre.  There were hints about global warming but nothing concrete about the time period. I thought it was present day but I was not completely sure. I also did not understand how so many ships came to be washed ashore; the story just began with them being there and being taken apart.  The description of the surroundings was through; there was no guessing to the surroundings, they took shape in front of my eyes.

Overall I enjoyed the story and the characters but I hoped to get more out of the book than I did. I look forward to reading the companion novel to this one to see where the story will go from here and if the same characters will be in it or if there will be new main characters.  This is not a book I would have picked up on my own but I am glad I heard about it on a few different blogs gave it a chance.
Posted by Unknown at 6:00 AM