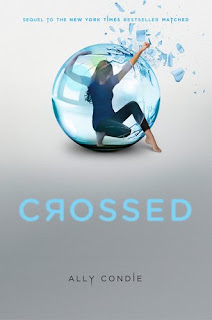 The hotly awaited second book in the dystopian Matched trilogy

In search of a future that may not exist and faced with the decision of who to share it with, Cassia journeys to the Outer Provinces in pursuit of Ky - taken by the Society to his certain death - only to find that he has escaped, leaving a series of clues in his wake.

Cassia's quest leads her to question much of what she holds dear, even as she finds glimmers of a different life across the border. But as Cassia nears resolve and certainty about her future with Ky, an invitation for rebellion, an unexpected betrayal, and a surprise visit from Xander - who may hold the key to the uprising and, still, to Cassia's heart - change the game once again. Nothing is as expected on the edge of Society, where crosses and double crosses make the path more twisted than ever.


Straight up I did not like this book as much as I liked Match.
The point of view is Crossed was from both Ky and Cassia. This was a great feature.  The reader gets an inside look into both of the characters and we can see how they reach to situations and how they are coping with being separated.  It was pretty evenly divided which I enjoyed.
Cassia was a little frustrating to me in this book as she was in Matched. She seems to have chosen Ky, but Xander is always there in her head.  Ky has clearly chosen her and I wish she would choose once and for all. I can understand where she is coming from and why it is hard. Xander has been her best friend for years and was her match while Ky is someone she recently met but she was the one who decided to push Xander away. I want him to be able to move on,  either with Cassia or without her.
Oh Ky you are my favourite.  I do like Xander but Ky is the one I am rooting for.  He has lived a hard life in a short time and I want him to be happy. He has struggled with so much that I wish he would just get a break.  I hope the third instalment of the series will give him some justice.
Xander you are a mystery.  He seems so straight edge and clean cut, but I found a lot about him in this book that I would have never expected. In a good way. I want to find out more about him.  I thought I knew him in Match, but Crossed has once again thrown me off course and I want to see who is he becoming and who he really is. The ending left me wanting more, I want to know what is going to happen next.
The cover was a similar to Matched..  I’m a fan of the plain and simple cover that only gives a little insight to the story.  I love the colors used in this cover. It seems a little odd, but I really liked them.  The cover was a good reference to the story within. This book was a little less action packed than the last one, but still good none the less. It had a lot of mystery and some heart stopping moments, but I found it was a slower pace, until the end of course.
I gave it a 4/5. I enjoyed it and want to read the next one, but Cassia’s indecisiveness made me feel like I could not get into the story as much as I wanted. What’s your opinion?