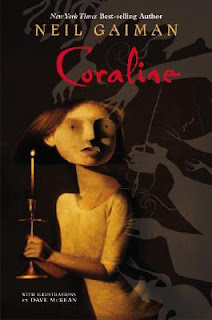 
Coraline's often wondered what's behind the locked door in the drawing room. It reveals only a brick wall when she finally opens it, but when she tries again later, a passageway mysteriously appears. Coraline is surprised to find a flat decorated exactly like her own, but strangely different. And when she finds her "other" parents in this alternate world, they are much more interesting despite their creepy black button eyes. When they make it clear, however, that they want to make her theirs forever, Coraline begins a nightmarish game to rescue her real parents and three children imprisoned in a mirror. With only a bored-through stone and an aloof cat to help, Coraline confronts this harrowing task of escaping these monstrous creatures.


Gaiman has delivered a wonderfully chilling novel, subtle yet intense on many levels. The line between pleasant and horrible is often blurred until what's what becomes suddenly clear, and like Coraline, we resist leaving this strange world until we're hooked. Unnerving drawings also cast a dark shadow over the book's eerie atmosphere, which is only heightened by simple, hair-raising text. Coraline is otherworldly storytelling at its best.
I am glad that I decided to give this author another chance. I read one of his adult books and I was not a fan at all. I seen this at a yard sale for 50 cents and it looked brand new so I decided to give him another chance. This book is intended for a younger audience and I think if I was younger when I read this book I would feel like I could have connected more with it.However, even though I felt like I could not connect the characters on a personal level I still really enjoyed this book. It was a good Halloween read.
Coraline is an adventurous girl who lives with her family in a large house divided into different flats. She discovers a door that appears to lead to nowhere in there flat one day while exploring. When she goes back to it the brick wall has disappeared  and mirror image of her flat appears. She discovers a other mother and father with black buttons for eyes who want to keep her here with them.
The main character is Coraline and she is an only child. She has made friends with some of the other residence of the house but she does not appear to have any friends her own age. She likes to go on adventures and explore as a past time. Her parents are very busy and do not seem to always have time to entertain her. Her other parents claim they would love to have her forever but Coraline does not want to stay with them, she wants to go back to her ordinary life at the flat with her real parents.
The story starts with the reader getting to know Coraline and her surroundings. The story was detailed in a way that I felt I was with Coraline but not giving too much detail to wear the reader down. I liked the spooky factor added into this story, Gaiman could have made a adventure story about Coraline but he added in the other parents and the spooky pictures for extra effect.
I enjoyed this novel and I am willing to give Gaiman another chance with his other novels. I would recommend this book for middle graders looking for a spooky Halloween read without being completely terrifying.
Posted by Unknown at 5:00 AM