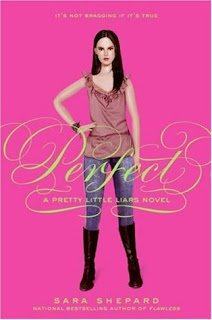 
In Rosewood, Pennsylvania, four perfect-looking girls aren't nearly as perfect as they seem.
Aria can't resist her forbidden ex. Hanna is on the verge of losing her BFF. Emily is freaking out over a simple kiss. And Spencer can't keep her hands off anything that belongs to her sister.
Lucky me. I know these pretty little liars better than they know themselves. But it's hard keeping all of their secrets to myself. They better do as I say . . . or else!
Perfect is the third instalment in the Pretty Little Liars series. It continues from the second book, filling in more gaps in the story. A continues to taunt the girls and Ali’s murder is still under investigation.
The ending was a complete cliff hanger, the last chapter was action packed. Wow. I really want to know who A is! I thought I knew, but now I have changed my mind completely. Again.
As with the other books, each character is separate from one another, it is rare for them to cross paths.  This book is a lot more secretive; they are getting more clues to what happened to Ali but there not sharing. We also learn a lot more about Spencer’s sister Melissa. I don’t know if I trust her.
Spencer starts to remember bits and pieces of what happened the night Ali disappeared. She starts to have more and more flash backs, slowly leaking more clues into what might have happened to Ali.
Ari has moved onto Shawn and has forgotten completely about Elza. Or has she. Her relationship with her family is still rocky, she is not speaking with her father and Elsie wants nothing to do with her. Shawn allows her to stay with him, but will Elza come between Ari and Shawn?
Hanna struggles with her friendship with Mona. As Mona pushes her away, Hanna finds a new friend who stands by her after Mona’s disastrous birthday party.
Emily struggles with her feelings for Maya. The spotlight seems less focused on her swimming and more on her relationship with Maya who wants to go public while Emily is not ready for that step.
This is my favourite so far. I am holding off on the fourth one to allow my brain to process all the information given in this book.
If you are a fan of the series, this book does not disappoint. If you have not started the series I recommend it. I was reluctant at first, but now I am glad it I did.
Posted by Unknown at 6:53 AM