Before I Die- Jenny Downham 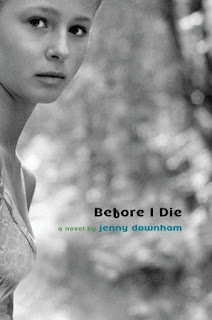 
Tessa has just months to live. Fighting back against hospital visits, endless tests, drugs with excruciating side-effects, Tessa compiles a list. It’s her To Do Before I Die list. And number one is Sex. Released from the constraints of ‘normal’ life, Tessa tastes new experiences to make her feel alive while her failing body struggles to keep up. Tessa’s feelings, her relationships with her father and brother, her estranged mother, her best friend, and her new boyfriend, all are painfully crystallised in the precious weeks before Tessa’s time finally runs out.


How do you decide what you want to accomplish before you die? This is the question Sixteen year old Tessa has to find the answer to. Diagnosed with leukemia she has decided against further treatment after four years. Before she dies, she has made a list of things she wants to accomplish.


This is a difficult to read.  It deals with death of a teenager.  I enjoyed Tessa’s list, things she added to her list were things that normal teenagers get to experience. Some of them were illegal, some curiosity.  In the end though, the greatest thing she found was love.


Her family must deal with the emotional roller coaster Tessa is going through.  Her father was one of the hardest characters to read about. He tried to keep Tessa as health as long as possible while also trying to give her what she wanted.  I admired him. Tessa was a difficult character to connect with, some days she was all over the place and in the next instant she refused to leave the house.  She was very selfish in the beginning but became more understanding as the book progressed. She started to be more understanding and changed her list to add members of her family.


Tessa has enlisted the help of her best friend Zoey to accomplish her list. Along the way the tables are turned and Tessa has to help Zoey go through a life changing decision of her own.


The book is pretty predictable.  There are really no surprises, but this did not deter me at all. I knew what the ending would be, but it did not disappoint. Overall I gave it a 3.5/ 5. I enjoyed the story, but Tessa was hard for me to connect with and it made me not enjoy the book as much as I had hoped it would.
Posted by Unknown at 1:07 PM