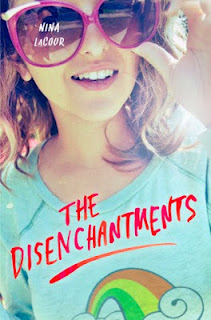 
Colby's post-high school plans have long been that he and his best friend Bev would tour with her band, then spend a year in Europe. When Bev announces that she will start college just after the tour, Colby struggles to understand why she changed her mind and what losing her means for his future.

The world’s worse girl band and a road trip= awesome. The Disenchantments is about the world’s worse all girl band.  Colby and Bev have had a long term pack that they will travel in Europe for a year instead of attending college after they spend the summer touring with Bev’s band. But at their first pit stop Bev announces she has made other plans for the fall and tells Colby that she will not be going to Europe with him. The tour must continue as Colby now has to decide if he should go to Europe without Bev or take a different route.


Music is such a big part of this book, I loved it. Lacour has integrated it into every aspect of the story.  There were some bands I have heard of and some I have never heard of, but I am curious to discover. The characters flow together; there was never any awkward moments where the characters did not flow with the story.


Colby and Bev were the two characters that grew the most. I was not a fan of Bev in the beginning; I could not understand why she acted so nonchalant and seemed almost cold towards Colby who is her best friend and the other members of her band.  Once the story progressed I understood her more and I appreciated her character and enjoyed watching her grow. I felt pretty bad for Colby throughout most of the book, mostly due to Bev’s betrayal, but like Bev he grew into a stronger person and I agreed with every decision he made. I loved how it ended, I thought it would be completely different but I was wrong and I am glad I was. Meg and Alexa were great secondary characters. The book is completely from Colby’s point of view, but I love how the sisters were integrated into the story. They were realistic; they got mad at each other but were always there for one another. My favourite was Melinda. She might not be a person, but she had personality and was there with the band and Colby throughout their road trip. She played a big role and the story would not have been the same without her.


I enjoyed absolutely everything about this book, I was not disappointed in anyway. The story, characters and description was all fantastic. The ending was fabulous; it tied up loose ends but left me wanting to know what will happen with the lives of the characters now.
Posted by Unknown at 7:00 AM