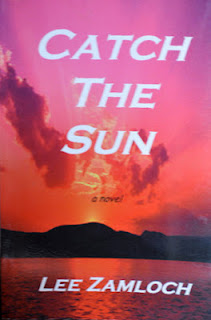 On a rainy morning in 1995, Marilyn Monroe appears on the bedroom patio of Amanda Grace, a former Playboy centerfold and jeans model whose acting career has tanked. Dancing, laughing, and gazing at Amanda through the glass doors, Marilyn seems to want something from her. But what? And how has the greatest sex symbol of her time been transported through time and space to contemporary Los Angeles?"Catch the Sun" is a story of growing obsession as Amanda Grace, a woman whose beauty is undeniable but whose talents are questionable, becomes captivated by the haunting apparition of Marilyn Monroe. As she explores the fragility, beauty, and dazzling rise to fame of the once great movie star, Amanda gradually loses her own tenuous hold on reality.

Catch the sun starts with an artist name Edith who commits suicide. She has left her two daughters, Joanne and Meredith behind to divide up her property. Meredith takes the name of Amanda Grace and after her mother’s death sees Marilyn Munroe on her patio dancing in the rain. Amanda becomes obsessed with Marilyn and is convinced she is talking to her and appearing occasionally.

Marilyn Munroe is such an icon actress but I actually have never read much about her. I was aware of the basic facts of her life but nothing to in depth. Catch the Sun gives flashes into the life of Marilyn Munroe and gives her a new series of events in her life.  Joanne was not a character that played a large part in the book, as Amanda’s obsession grows her sister fades out of the story. Amanda was complex character that got her fame in a not so glamour way. Amanda slowly sinks into madness and complete separates herself from the remainder of her family.

The concept was an interesting one; I found the book very engaging and hard to put down. I had to know what was going to happen next with Marilyn and Amanda.  I enjoyed the duel points of view from Marilyn and Amanda as their lives intertwined together.

I really enjoyed everything about this book, I thought the characters were all complex and had depth. The story was interesting, I thought I had the ending figured out but the last twist in the end caught me off guard and the book ended on a good note.  I was intrigued by the ending and find myself wondering what is going to happen next with Amanda. I look forward to reading more books by this author.