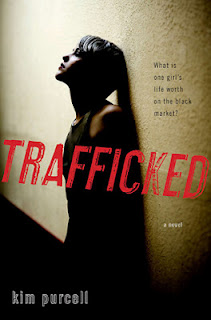 A 17-year-old Moldovan girl whose parents have been killed is brought to the United States to work as a slave for a family in Los Angeles.Hannah believes she’s being brought from Moldova to Los Angeles to become a nanny for a Russian family. But her American dream quickly spirals into a nightmare. The Platonovs force Hannah to work sixteen-hour days, won’t let her leave the house, and seem to have a lot of secrets—from Hannah and from each other.Stranded in a foreign land with false documents, no money, and nobody who can help her, Hannah must find a way to save herself from her new status as a modern-day slave or risk losing the one thing she has left: her life.

Hannah is brought to the United States to be a nanny for a Russian family or so she thinks. She soon realizes that she has become a slave to the family instead of a hired nanny like she was told. She hoped that she would be able to come and learn English in the hopes of becoming a doctor. She must now take control of her life in a country where she has none.

I really enjoyed Hannah's character. She was not as trusting as I originally thought she would be, she has dealt with a lot of heartache in her life already at such a young age that she seemed to have a pretty clear vision of how the world could be. Hannah is only trying to help her grandmother get her cataract surgery.

This is a hear wrenching book, I loved Hannah and getting to hear her story but knowing how true to reality this book is makes me sad. I hope that the percentage of the sales of this book that is going to organizations to help people like the fictional Hannah can help to stop human trafficking. This book is hauntingly realistic.
Posted by Unknown at 6:00 AM