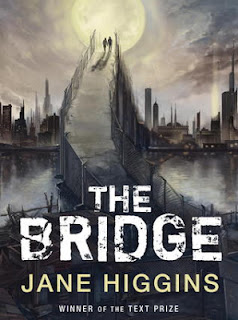 
The City is divided. The bridges gated. In Southside, the hostiles live in squalor and desperation, waiting for a chance to overrun the residents of Cityside.Nik is still in high school but destined for a great career with the Internal Security and Intelligence Services, the brains behind the war. But when ISIS comes recruiting, everyone is shocked when he isn’t chosen. There must be an explanation, but no one will talk about it. Then the school is bombed and the hostiles take the bridges. Buildings are burning, kids are dead, and the hostiles have kidnapped Sol. Now ISIS is hunting for Nik.But Nik is on the run, with Sol’s sister Fyffe and ISIS hot on their trail. They cross the bridge in search of Sol, and Nik finds answers to questions he’d never dared to ask.The Bridge is a gritty adventure set in a future world where fear of outsiders pervades everything. A heart-stopping novel about friendship, identity and courage from an exciting new voice in young-adult fiction.


This book catches the eye. The cover is really dark and creepy and the pages have the bevelled edges on it. I really liked the cover and the synopsis matched it.

Nik is a high school student who is destined for a great career with ISIS who are the brains behind the war between the two sides. The Cityside and the Southside. Nik has been groomed into becoming a member of ISIS but when they do not choose him everyone is shocked and an explanation as to why is not given to him. The school breaks out into confusion when a bomb goes off and now ISIS is looking at Nik as a criminal.

Once I started to read the book I felt almost like parts were missing from the story. I would read a chapter and I felt like someone had taken pages out of the book, at times things jumped around really fast with no explanation and it was very confusing.

The main story line is this I am assuming country is divided by the Cityside and the Southside who are at war with each other.  The cityside teaches them that the Southside is the enemy and the Southside says the same about the city side. Where the story left off it felt like there should be a sequel which as of right now there is none. The ending seemed to open ended and I felt like nothing was answered only that the story was laid out and now the second book will go further into the history of this society.

I felt like I missed a lot of the story which was not there. I enjoyed the plot but I found it hard to connect with the characters which took away from the great  plot. I enjoyed it but I seen so much potential that was not tapped into.
Posted by Unknown at 5:00 AM