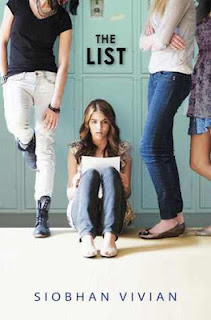 An intense look at the rules of high school attraction -- and the price that's paid for them.

It happens every year. A list is posted, and one girl from each grade is chosen as the prettiest, and another is chosen as the ugliest. Nobody knows who makes the list. It almost doesn't matter. The damage is done the minute it goes up.

This is the story of eight girls, freshman to senior, "pretty" and "ugly." And it's also the story of how we see ourselves, and how other people see us, and the tangled connection of the two.


I found the list to be quite scary in the sense on how realistic it was. It is possible to picture a high school where a list of the most beautiful and the ugliest girls is posted and everyone in school makes their judgements based on what the list tells them to.


The girls in the novel were all connected by the list, in a way there paths crossed through the story as we get a view into each girls life in school and out of it. The girls listed as the most beautiful are not necessarily the happiest. Each girl faced different struggles.


I found all the characters to be interesting, some were irritating but once the back story was in place I found myself sympathizing with some characters more than others. I felt like I could connect with all the characters, even though they were all different they each were striving for the same thing.  The only characters I found were hard to understand were the male characters that used the list as a rating system and used it to judge without reasoning.


The ending was left very open ended and allowed the reader to fill in the gaps of what you think will happen next. The creator of the list surprised me. I was convinced it was someone the author did not mention, a third party look into the lives of the girls on the list. I enjoyed the book; it made me realize how scary high school can be.
Posted by Unknown at 6:00 AM