What Looks Like Crazy on an Ordinary Day- Pearl Cleage 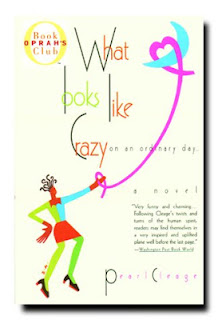 
In a remarkable debut novel that sizzles with sensuality, crackles with life-affirming energy and moves the reader to laughter and tears, author Pearl Cleage creates a world rich in character, human drama, and deep, compassionate understanding. After a decade of luxe living in Atlanta, Ava Johnson has returned to tiny Idlewild, Michigan -- her fabulous career and power plans smashed to bits on one dark truth: Ava has tested positive for HIV. Bur rather than a sorrowful end, her homecoming is a new beginning. Because, in the ten-plus years since she left, all the problems of the big city have invaded the sleepy community of her childhood. Because dear friends and family sorely need her help in the face of impending trouble and tragedy, and Ava cannot turn her back on them. And because, most importantly, Ava Johnson is inexplicably and undeniably falling in love.

This is a spectacular debut novel about a woman named Ava Johnson who decides to return to her childhood home in Idlewild, Michigan after she is given the news that she is HIV positive. As Ava learns to live with the disease and deciding where to go from here, she falls in love.

The story broke my heart. Ava was constantly being treated as an outsider, people treated her like she was contagious from touching her. It was awful. There were so many people I wanted to shake and tell them to properly educate themselves. Ava was a strong character though, she did have her moments where she let it get to her but overall she handled it amazingly well.

Ava's sister Joyce is also suffering from heartache. She has lost the love of her life. There relationship is amazing.  They have there differences, but they are always there for each other. Joyce was my favourite character, she was so strong and there for her sister whenever she needed her.

The reverends wife was a character I wanted to shake so badly, she treated everyone like they were less than her. Thankfully, Ava and Joyce put her in her place when needed. All the characters blended so well together, the story was smooth and enjoyable. It was hard to read but it was so amazingly good. This book does get a little graphic at times, especially with violence.

The ending was so sweet and perfect for the book. I do not think any other ending would have worked as well as this one did. Amazing book, I will be looking out for more of her books.