Once Was Lost- Sara Zarr 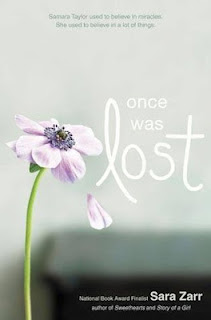 Samara Taylor used to believe in miracles. She used to believe in a lot of things. As a pastor's kid, it's hard not to buy in to the idea of the perfect family, a loving God, and amazing grace. But lately, Sam has a lot of reason to doubt. Her mother lands in rehab after a DUI and her father seems more interested in his congregation than his family. When a young girl in her small town is kidnapped, the local tragedy overlaps with Sam's personal one, and the already-worn thread of faith holding her together begins to unravel.

In her third novel, acclaimed author Sara Zarr examines the coexistence of affliction and hope, and what happens when everything you thought you believed---about God, about your family, about yourself---is transformed.

This was my first Sara Zarr book and I was not blown away like I thought I would be by it. The story line was good but I was not a huge fan of all the characters so it made it hard to relate to them which unfortunately made me not enjoy the book as much as I could have.

Samara's life is slowly unraveling. It starts with her mother going into rehab after she receives a DUI, while her mother is away her father throws himself completely into his work as a pastor and seems to care more for his congregation than his own family. The final straw is when a young girl goes missing in town. Samara has started to lose faith in her father.

I was not a huge fan of Samara. She never spoke out, she let everyone walk over her. She frustrated me, she had all these great ideas but she never spoke her opinion. I had a hard time getting into it. I enjoyed the secondary characters more than I enjoyed the main character.

The story itself was pretty interesting, but the characters felt a little out of place at times, things happened either quickly or very slowly, there was not happy medium. I wish the story would have had a better flow to it.

I will give Sara Zarr's other books a try, but this is not one I will read again.
Posted by Unknown at 6:00 AM