Some Girls Are- Courtney Summers 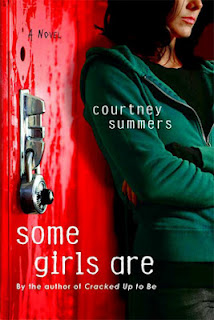 
Climbing to the top of the social ladder is hard--falling from it is even harder. Regina Afton used to be a member of the Fearsome Fivesome, an all-girl clique both feared and revered by the students at Hallowell High... until vicious rumors about her and her best friend's boyfriend start going around. Now Regina's been "frozen out" and her ex-best friends are out for revenge. If Regina was guilty, it would be one thing, but the rumors are far from the terrifying truth and the bullying is getting more intense by the day. She takes solace in the company of Michael Hayden, a misfit with a tragic past who she herself used to bully. Friendship doesn't come easily for these onetime enemies, and as Regina works hard to make amends for her past, she realizes Michael could be more than just a friend... if threats from the Fearsome Foursome don't break them both first.

Tensions grow and the abuse worsens as the final days of senior year march toward an explosive conclusion in this dark new tale from the author of Cracked Up To Be.


This is my first Courtney summers book and I loved it. This book is like mean girls x 10. It is scary. The sad part is bullying like this happens every day. I had friends who were bullied and I know how hard it was for them to convince themselves that when high school was over they would never have to see these people again. I was fortunate enough from grade 10 on to go to a small community high school where even the “popular” girls talked to everyone. I personally had a pretty good high school experience compared to Regina.


Regina was at the top of the social latter until a rumour about Regina and her best friend’s boyfriend starts.  The harder Regina tries to get her ex-best friend Anna to listen to her, the more Anna punishes her. Regina must now find her new spot at school; reaching the top of the social latter means you do not have a lot of friends at the bottom.


Regina was a lot tougher than I thought. She put up with a lot of crap without complaining about it. I admired her for that, her past was pretty unfortunate. It was sad to see how she treated people to get to the top. Her boyfriend was a complete jerk. I hated the way he treated her.


Then there is a boy who is sweet and makes everything better. This is the same boy that was pushed around and bullied for being different but helps Regina when she needs it most.


Anna was a hard character for me.  I hated how she treated Regina, but I could understand why she did not want to believe the truth about Regina.


I loved this book; it was brutally honest which was exactly what I wanted out of it. It touched on the hard issues that teens deal with on a daily basis. I recommend this to everyone and anyone.
Posted by Unknown at 6:51 AM